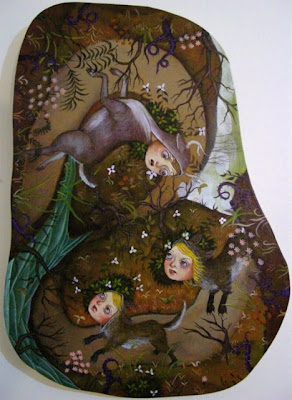 
Alex Kuno received his BFA from the University of Minnesota and is an emerging, full-time artist currently living and working out of his home studio in NE Minneapolis. Since creating his The Miscreants of Tiny Town series in 2007, his work has shown in numerous galleries, universities and private collections regionally and nationally, and now consistently works on commission for clients around the country. In 2010, he was awarded a CSA grant and received formal gallery representation with Curly Tale Fine Art in downtown Chicago, IL.

Tell me about your work? What are you currently working on?
The Miscreants of Tiny Town is a constantly evolving series of apocalyptic, satiric fairy tales that are as whimsical as they are rampantly morose. The figures and landscapes in the paintings are painstakingly rendered using a combination of acrylics, graphite, chalk, ink, ballpoint pens and crayons on pine boards that I’ve carved into curving, free-form shapes.

The narratives in my work typically involve lost, deranged orphans who’ve been reduced to take very grim actions in their search for a home within an endless, foreboding landscape. These scenes trap the characters in the “middle” of a larger, unseen story, so their motivations and outcomes are permanently left unresolved. Though the series vividly or even gleefully depicts all sorts of terrible things that people in the Real World have been known to do to each other once times get tough, these images aren’t necessarily meant to be “nightmarish,” so much as they come from the desire to put a playful, childlike face on the formless anxieties that keep stressed-out grown-ups awake at night. 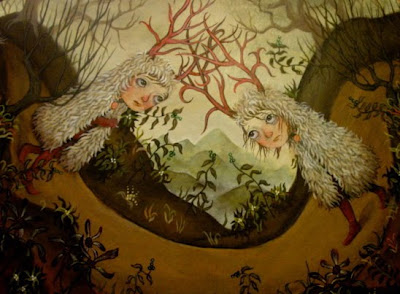 How has your work changed since you started the series?


I know that the old phrase “you’re your own worst critic” isn’t really used as “advice,” so much as it’s usually a polite way for people to tell me that I should learn to just shut up and accept a casual compliment rather than disagree with the person who gave it. But I’ve taken that old cliché to heart at some point, and I’ve since used it as a way to try to teach myself to remain as objective as I possibly can about every painting I produce, and to see each one as a learning experience rather than as a “finished” piece. 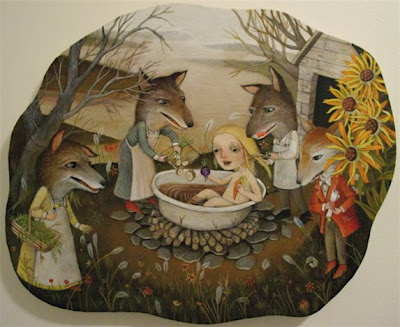 Tell me about your working space and your creative process?


I’m currently using the “mother-in-law” apartment attached to my home as my studio and office space. I built a wrap-around desk in one of the rooms as my primary work area, so I can save space and make it more effective to mass-produce paintings. In the same room, I have a 4’x6’ white board where I can quickly jot down life-sized, laughably stupid-looking sketches for compositions or character ideas.

I carve out a loosely formed shape of wood with a jigsaw, sand down the edges, screw on a recessed backing, then slather on several thick coats of gesso with my hands until I get a texture that’s rugged but easy to work with, then let the shape of the wood dictate the composition of the landscape. From there I try to be as intuitive as I can, blocking out the characters with rough chalk outlines in relation to the landscape and keep reworking them until a conversation I think is worth having begins to emerge on its own. It’s a huge mess that requires a lot more sitting and staring than actual physical labor, but once the piece finally starts to take shape, I zone out while I refine the details until it pretty much finishes itself. 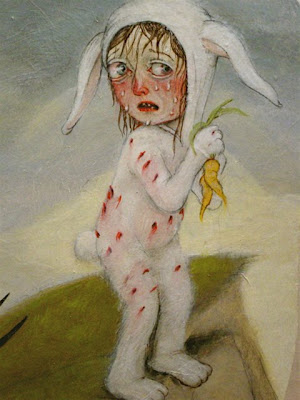 
One of the most important lessons I learned while I lived in New York is to never take Minneapolis’ art scene for granted.

and the entirely way-too underexposed Dan Murphy are just a few of my favorites.


Since I spend all of my time painting, every day has become an “art day” these days, whether I want it to be or not. So if you were to literally follow me around, you’d get the opportunity to watch me stare at and/or work on all of my unfinished paintings, check my websites, email clients, shove the cat off of miscellaneous desks and tables and swear at myself while Goodfellas or Louie play on an endless loop. If you had any sense you’d leave immediately. Then you’d go to SooVAC, Fox Tax, or show up at a Spotart opening to clear your head. 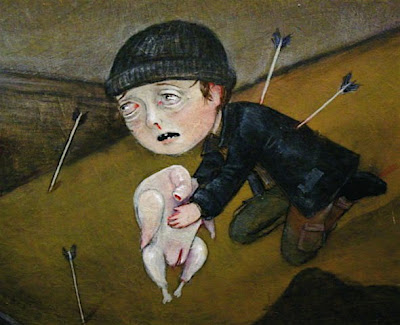 
I’m in the process of finishing up three pieces that will be featured in the Stevens Square Center for the Arts’ (SSCA) new show “Nature of Romance,” opening February 12, and I made a piece specifically for the Anderson Art Center’s “Into the Whirlwind” show out in Red Wing, and that show’s going on now.

Aside from that I’m starting some new commissions and am building a glut of new work to be shown in my gallery in Chicago. 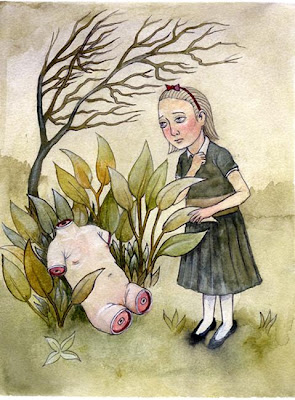 If you were to receive a $2,000 art grant to do anything you want, what would you do?
In spite of (or maybe because of) the fact that I’m not even remotely Catholic, I’ve recently started to become interested in learning about its various saints for some reason. One that stuck out for me was Saint Rita of Cascia, the patron saint of lost and impossible causes. (She’s the one with the weird red scar on her forehead.) It would be great to have the chance to make a series of relief woodcarvings depicting her life and symbolism.

Who am I kidding? I’d just blow it all on Pepto Bismol or something.