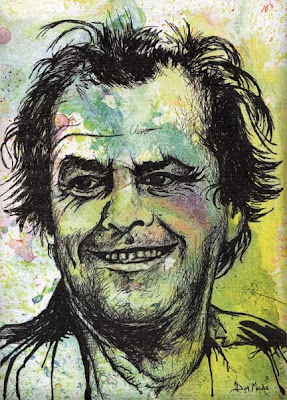 
Bio~
Beginning life in central Wisconsin and moving to the Twin Cities some time after 2001, Charles Denton attended college with the intention of a Fine Arts focus. Working as a freelance artist, Charles began commissioning paintings, murals, tattoos and any form of art he could manage. Once residing in the Twin Cities, Charles helped co-found the artist collaborative Dim Media. Still involved in the organization, Charles continually paints and writes whenever time allows.

Tell me about your work? What are you currently working on? How is this different from past projects?
Currently, busy with multiple projects, Charles is contributing to the continuation of “The Birthmarks” series with Dim Media. This original twelve-piece series is expanding to include another ten abstract paintings. Working on this series has been a fun challenge. Rather than being one artist working on one individualized concept, the process of creating “The Birthmarks” has been much like the analogy of creating a themed music album. Each painting is orchestrated and formulated like a band would compose their songs. Together, the entire “Birthmarks Series” encompasses each artist’s contribution to the agreed upon final image.


This technique of working as a group is very contrasting to creating personal or commissioned pieces. When working individually there is less surprise and the outcome is rather controlled or expected. Working in collaborated efforts, the results vary from surprisingly good, to disturbingly conflicting, but most of the time, unexpectedly interesting. It’s like, “Wow, I would have never thought of doing that.” Seeing what the other members of Dim Media create is an exciting process. 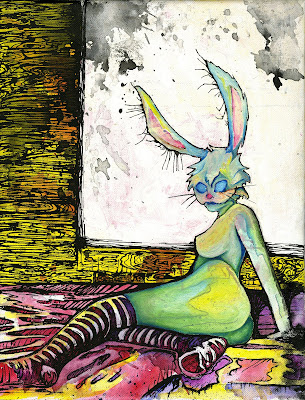 “Window Bunny” – Bunny Series
"What is Art?" is certainly too big of a question to ask here, but what do you hope your audience takes away from your art? What statement do you hope to make?
When viewing other people’s art I tend to study it for details, techniques, color usage and compositions. Finding interesting subject matter and themes in other work adds to my personal inspiration. I would hope others, after seeing some of my work, would feel the same way.

What was the best advice given to you as an artist?
“Hide your brush strokes…. I think it needs more yellow, and when you paint a landscape, think of an alien planet.” 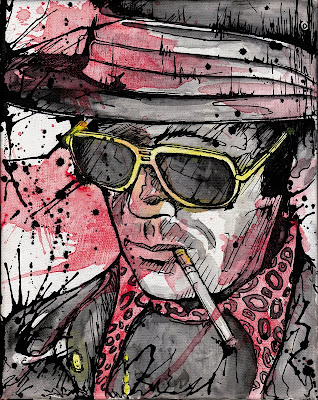 “The Good Doctor” – Part of the Paparazzi Series
Tell me about your working space and your creative process?
My working space is often near a window during the winter months and in a garage/studio in the warmer seasons. When collaborating with the Dim Media crew, we have a relatively secure location where we routinely immerse ourselves in the painting process.
At the moment, I am enthralled with the ability words have in animating a scene. A painting takes hours, days, months, even years to create a single image or idea. Writing allows a flow of interactive images, concepts, and movement that helps a particular scene come alive.
By writing short story sequences or ideas, I later regurgitate certain scenes to compose on canvas or paper.

“Skull” – Current work in Progress
Who are some of the Minnesota artists you enjoy?
I recently saw Margaret Wall-Romana’s work at the MIA (Interview) and was blown away by her technique and ability to manipulate the medium. I found it very refreshing and inspiring.
I also like Brian Fink’s “Poor Farm Studio." Though, I have never been there first hand, nor have I really had the chance to see his work, I like the concept of the lifestyle and studio atmosphere. It would be nice to find isolation for some time and work continuously without any distraction.
I also have to give props to fellow Dim Media members:
Joe Lipscomb: http://storyofdim.com/category/artwork/artists/joe/
Blaine Garrett: http://blainegarrett.com/
Ivy Sendrijas: http://storyofdim.com/category/artwork/artists/ivy/ 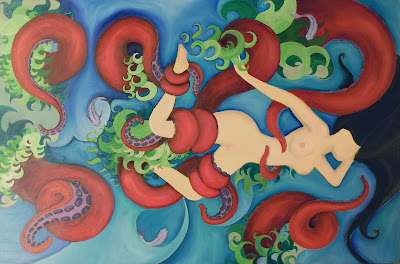 “Tentacle Love” – Current work in Progress
If I were to follow you around to see art in Minnesota, which places would we go? What would we see?
I like common areas, streets, old buildings, and the natural or unnatural environment. I enjoy the cracks forming in structures, fliers accumulating on telephone poles, the graffiti on trains, or how the creek cuts through the ground. We’d probably take a trip out to Lilydale along the river or a quick stop at the MIA to check out some Egyptian artifacts.
At least once a month, I’ll hit up the occasional art show that catches my eye in the City Pages. Other than that, I don’t usually seek out too much art besides the stuff hanging in coffee shops.

Where do you go online for good art resources, whether to find a new artist, or to see what is going on in the art world locally and otherwise?
I don’t really. Maybe it’s laziness or lack of time. My browser home page is either set to “creaturesinmyhead.com” or “explodingdog.com” other then that I receive mnartist emails or news from distinctionart.com.

Do you have any exhibits to promote in the near future?
“The Birthmarks” series will be on display at Hopkins Center For The Arts June 2–July 10, 2011 in the Redepenning Gallery with an opening reception: Thursday, June 2, 2011 6-8 pm.
I will also be at a table with Dim Media for the 2011 MCBA SPRINGCON CELEBRATION- MAY 21 & 22 located in the Grandstand of the Minnesota State Fairgrounds.
Sometime this summer I will likely be under a shaded tent at the Red Hot Art Festival. 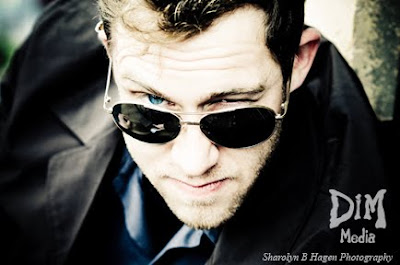