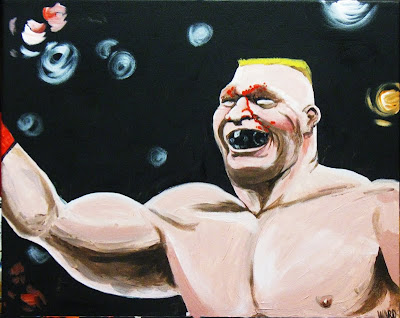 Lance Ward
Altered Esthetics Featured Interview for
Comic Cookbook
Opening Reception
Friday, August 5, 2011 - 7pm-10pm
Artists' Discussion
Saturday, August 20, 2011 - 1pm-3pm
Lance Ward
St.Paul Park, MN
wardfamilyfun@msn.com
http://Tatertotdiaperman.wordpress.com
BIO: Lance Ward, age 43, father of three.
Lance Ward is a strange case. He never went to art school. He never went to college. He spent most of his twenties in and out of mental hospitals and group homes, giving tattoo's to his friends for cigarette money. It was only after a heart attack and subsequent near-death experience that he was motivated to use his talent to leave a legacy for his children. He has since become a locally syndicated editorial cartoonist appearing in the South Washington County Bulletin, the Woodbury Bulletin, and on occasion the Hastings Star-Gazette. His graphic novel "Stovetop" is being published by Creator's Edge Press and will see national release fall 2011. If that's not enough, he also hosts "The Geek Report", a podcast featuring local artists discussing popular geek culture. 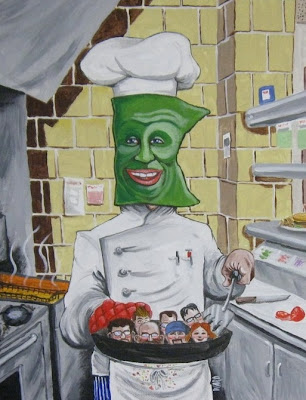 Tell me about your work. What are you currently working on? How is this different from past projects?
Before I can answer this question properly, you need a little back-story. You see, my parents never really encouraged me to focus on my artistic talent as a career. My mom wanted to get me a factory job when I turned eighteen, work my whole life and retire at 65. My Dad really care what I did for my life, as long as I was out of his house after I graduated. So I had to work, I had to move out after high school. So I cooked. And did construction. And a bunch of other empty jobs just so I could afford to maintain my unhappy life. This was made even worse by the fact that I suffered from depression and horrible anxiety. I spent my nineteenth birthday in the locked unit at Abbot-Northwestern hospital. Committed by my own mother. I tried to overcome my depression by trying to work a little bit, but I kept ending up back in the psyche unit. My drawing was the only thing that remained a constant. I drew every day. Meaningless drawings with no rhyme or reason. A friend of mine bought some tattoo equipment and I would use it on my friends for extra money, mostly to buy cigarettes or the occasional bag of weed. In 1995-97, I did a series of comic strip ads for The Root Cellar record store, which ran in the City Pages and other local papers. That was it until after my heart attack. My heart stopped in the hospital and I saw the portal to the other side.
The nurses and doctors revived me, but I was forever changed. The doctors gave me five years to live. I decided to give cartooning a try, so I came up with a daily newspaper strip called "Starship Down". I sent it out to two places, and was rejected both times. This sent me into a depression for two years. I just lay in bed and waited for the five years to be up. I didn't even pick up a pencil. It was only after my wife gave me sketchbook did I begin to crawl out of that hole. I wrote and drew in that sketch book the whole summer of 2009, until it was out of paper. The five years was up and I was still alive. I figured that I was still alive for a reason, to leave a legacy for my kids, so that they would know that there dad wasn't just some depressed loser. I had the confidence to give it a try again, and it worked. I stuck with it to great success so far. So, what am I working on? Everything. Everything that I can think of. I have to make up for a life of wasting time.
I have completed six graphic novels. I have completed a huge autobiography of my life (which has been quite interesting). I am 124 page into an epic sci-fi story. I am working on a sequel to my graphic novel "Stovetop", which is being published by Creator's Edge Press out of auburn Washington, in addition to my weekly duties as editorial cartoonist for a few of my local newspapers. And I paint. Sporadically, but I love it. 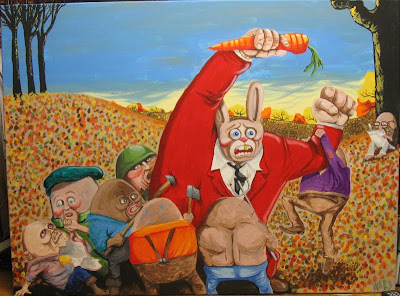 "What is art" is certainly too big of a question to ask here, but what do you hope your audience takes away from your art? What statement do you hope to make?
As far as my cartoons are concerned, I just try to entertain. But I want to do it through the use of emotion, as opposed to big flashy action panels or people standing around trying to look good. I like to tell the story on the faces of my characters instead of trying to draw every bit of the action or hammering you over the head. My paintings are the same essentially, except a get one chance, one piece of art to get the entire story across. How quickly we can see what is going on by the reaction of fear, or joy!

What was the best advice given to you as an artist?
In 1985, I was given the opportunity to show some of my cartoons to Greg Howard, who drew a daily newspaper comic called "Sally Forth". He was very impressed at my talent at a young age, and he gave me the the single most important piece of advice I had had up until that point. He said "Go out and experience life. Take every opportunity to do new and interesting things. Even if you don't ever go to college, the experiences you have and the relationships you make with other people are the most important thing to making you a great writer, as well as a great artist." It was profound. Here was a man I respected and the first cartoonist I'd ever met, telling me that it would be okay to not go to college. that I could be great without it. 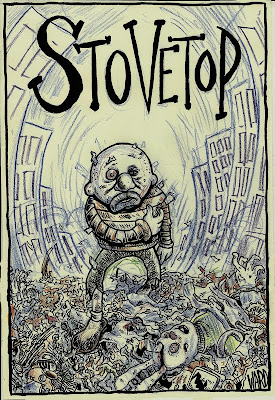 Tell me about your workspace and your creative process.
I felt that I needed a private place to work, so I took some of the scrap wood in our garage and a bunch of old shelves, and I built a private little studio in my basement. It has become my bedroom as well. It is my hole. I stay in it a lot. As far as my process goes, I force myself to sit at the table and start to draw. I have to make myself draw everyday or the depression will surely take hold of me.

Who are some of the Minnesota artists you enjoy?
I love Alex Kuno's weird little kid paintings http://alexkuno.blogspot.com and I love Lupi Mcginty's illustrations! So good! http://lupiloops.com and I also have been loving Nick Straight's absurd comic "Infinity Wall" http://infinitywallcomix.com. 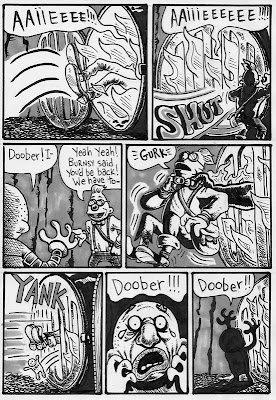 If I were to follow you around to see art in Minnesota, which places would we go? What would we see?
I am kind of a recluse, and I don't really go out to see art very much. But I will mention some large Minneapolis art project that you have probably never heard of. If you go to Bloomington Avenue right off of Lake Street in Minneapolis, and travel north two blocks, you can see a little dirt path leading from the bridge down to the railroad tracks below. Don't go alone. If you take the tracks West, towards Hennepin Ave., along the way you will see the most fantastic graffiti paintings in the city. Under every bridge and all along the concrete embankments are paintings and tags. It is truly amazing! It's dangerous, though.

Where do you go online for good art resources, whether to find a new artist, or to see what is going on in the art world locally or otherwise?
Well, I use facebook as a great networking resource, and the International Cartoonist Conspiracy has a great sight with upcoming events http://cartoonistconspiracy.com and you can always check out my podcast website for the latest goings on. http://theblatshow.wordpress.com 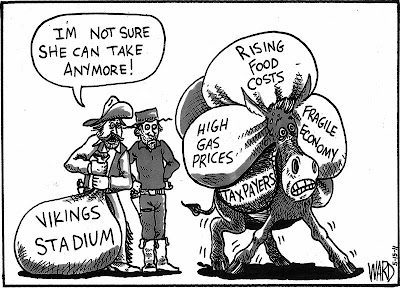 What can we expect to see from you in the future?
I am in Comic Cookbook at Altered Esthetics which runs from 8/4/11-8/25/11. Opening reception is Friday 8/5/11.
You can check out what I've been working on at http://Tatertotdiaperman.wordpress.com
Posted by Michael McGraw - www.Local-Artist-Interviews.com at 7:33 PM