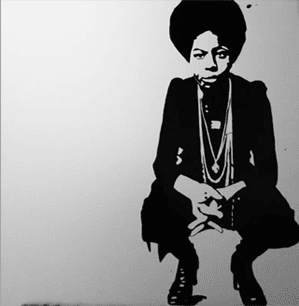 WORK: I'm known for painting icons on sheet aluminum. But I feel the subject matter is boring, so now I've retreated to my roots; old school, large scale oil on canvas and murals. I have an extensive background in scenic painting, which translates to my love for large/giant/huge scale work. I started a series of huge oil on canvas paintings based on Tom Robbins novels, a la Renaissance. The first in the body is my interpretation of the book 'Jitterbug Perfume.' It depicts 3 of the main characters, who are immortal, about to 'dematerialize' from Paris to the New World in 1776. I am simultaneously working on 4 huge pinups for the Herkimer mural, and have 2 more lined up for the rest of the summer.
WHAT IS ART: Art is anything that keeps us from being bored. 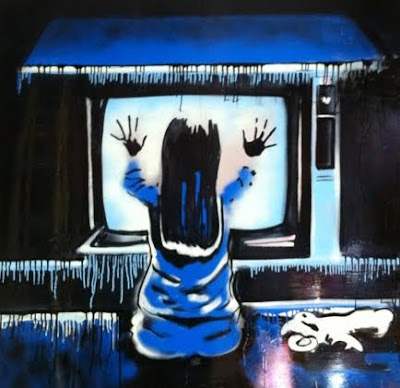 WORK SPACE: I have a garage full of tools, some huge walls, and a million ideas. I head to the studio at 10 after walking the dog. Stare at things for 4 hours, then start doing things, which usually don't end well. Then at midnight I go home and start over in the morning. 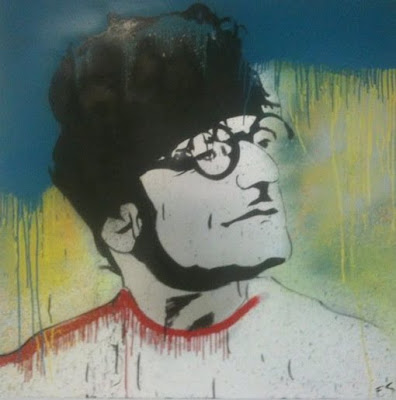 MINNESOTA ART: Graffiti Graveyard in Duluth, some studios in Duluth, then to Minneapolis: Rogue Buddha to visit Nick, and to SpotArt to visit Scottie and Carissa; Northern Warehouse in St. Paul, visit Steve and Karen at Gallery13, SooVAC always has something amazing, and last but not least to Cause Spirit and Sound Bar to see what new show Tony has curated -- he has a knack for finding the best of the new.

ONLINE: Mostly Facebook and Twitter, I follow Juxtapoze, Fecal Face, all the museums, Brooklyn/London Street Art, and a bunch of my favorite artists, who I learn about through these sources or friends. I would not know anything about local modern art without Twitter or Facebook. I also follow all of the local galleries.

EXHIBITS:
Cult Sisters II
At Cult Status Gallery
Featuring the work of some of the best female artists in the twin cities: Kristen Arden, JM Culver, Louisa Greenstock, Kate Keke Hall, Amina Harper, Kara Hendershot, Alison Hiltner, Gina Louise, Rhea Pappas, Wendy Petersen, Erin Sayer, Tonja Torgerson
Links to Cult Sisters Artists information and MNOriginals interviews (Link)
Opening Reception: Saturday May 14, 2011 (7:30 - ?)
Closing Reception: Friday June 17th
2913 Harriet Ave S
Mpls, MN 55408
Also, look for me painting murals on scaffolding around LynLake and St. Paul this summer. This January, I'll have a solo show at CSG debuting my new Tom Robbins series. And this summer, CSG will not only be a venue for Fringe Fest, but I will also be a featured artist in the production 'The 612.'
Posted by Michael McGraw - www.Local-Artist-Interviews.com at 6:19 AM