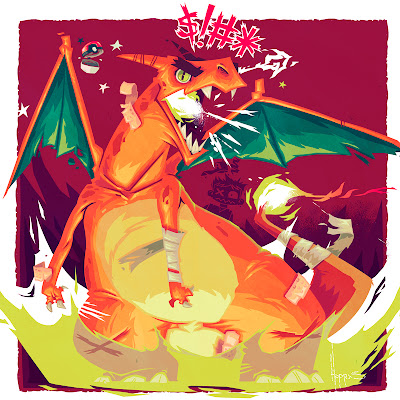 Name: Adam Hoppus
City/State: Minneapolis, MN
Email: ah_drawl@yahoo.com
Website: monsters-n-stuff.blogspot.com
Twitter: @adam8ch
Bio~
Born in “middle of nowhere” Texas and raised in “middle of nowhere” Iowa left a lot of room for imagination to run rampant. Amazed by all things artistic, Adam fell in love most with animation. Adam first received recognition by being accepted to the Connie Belin Center for Gifted Children at the age of 12. He began his professional career at age16 when he got a job at a small screen printing company in the art department. Adam attended Iowa State University majoring in Drawing/Painting, but left after 2 years to attend Minneapolis College of Art and Design as an Animation Major with a Minor in Illustration/Graphic Design.
After graduation he pursued animation, providing work for the film “Death Becomes Them” directed by Dan Lund (2003) shortly before the American 2D animation industry fell apart. Adam switched gears to pursue an internship at Target Corporation as a product designer. Eight years later, Adam is now a Senior Designer having worked in multiple areas of the company including Sporting Goods, Luggage, Toys, Stationery, Bedding and Accessories, Storage and Org., and Apparel. Adam has won multiple internal design awards, currently has 6 design/utility patents, and has helped establish many internal brands including Circo, Play Wonder, and Spritz. Adam also recently taught his first class at MCAD.
Adam has not actively pursued gallery work, but has been shown in “One Inch One Night Stand” (Aug. 2011), “Pokemon Battle Royal” (April 2012), “Night of the Exquisite Corpse” (Curator – August 2012), and the upcoming “Expletive Show” (Sept. 2012). 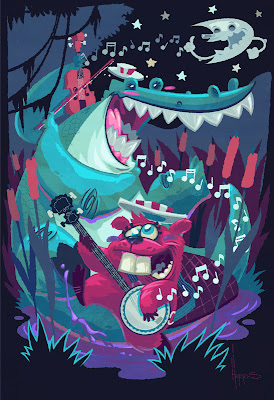 "Super Awesome Art Challenge" Teeth
Tell me about your work. What are you currently working on? How is it different from past projects?
Working in product design keeps me pumping out a steady stream of mom friendly, kid approved creations that don’t always allow for a lot of time for personal work. When I do sit down to do my own thing it’s usually more of a stream of consciousness than a “piece”. I just try to get out all of the completely bizarre things I can’t do at work. I sketch a lot, try new things with programs, pens, paints, and generally just try to keep my skills fresh. I usually work digital, but having recently taught a traditional medias class at MCAD I really reminded myself how much fun, and how important it is to work with my hands.

I am notorious for starting massive personal projects and floundering halfway through. I think my brain gets tired and wants a new project before I finish the old one. Currently I have a personal project on my blog called “Weekend Monster”. I hate drawing cars, but I love drawing monsters. I gave myself the challenge of drawing a car and its monster owner every weekend for a year. Sadly I got to monster/car number 8 and stopped. I will pick it up again someday.

Most recently I’ve been doing more show work. I was in the “Pokemon Battle Royale” show in April, and am participating in and co-curating the “Night of the Exquisite Corpse” show August 17th 2012. It is a 50+ artist collaborative exquisite corpse style paper toy exhibit with the theme of the undead. I really enjoy paper craft/paper toys and also interacting with some of my favorite artists has made this show a blast to work on. However, after assembling 50+ paper toys, I may take a break from them for a while. 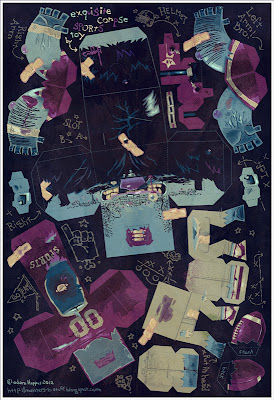 Why did you become an artist?
I have been drawing, creating, imagining and playing for as long as I can remember. It’s an odd question that I think I can only answer by saying “It’s all I know how to be”. I, like most artists, don’t see the world the same way everyone else does. So the only way I could figure out how to communicate that vision was to become an artist. Drawing only the things I can imagine, telling the stories that came only from my head. I was definitely fueled by stuff like comics, cartoons, toys, and things like that, but on a much deeper level as a child I was amazed by the “magic”, the emotional experience that artists can create.

People like Jim Henson who created so much imagination and wonder. It was all so colorful, wild, fantastical and beautiful. Animation masters like Chuck Jones, who invented motion blur and draws the best facial expressions on any character ever. That split second before Wile E. Coyote get smashed with a rock you can tell exactly what he’s thinking by just looking at his face. Frank and Ollie of the Nine Old Men of Disney can’t be matched for the amount of personification they could bring to a drawing. Basically I grew up being mesmerized by these magicians and all I wanted to be able to do was to have a fragment of that ability to create that kind of magic, that emotional connection, myself someday. Plus, I am awful at math, geography and history…so I didn’t have much of a choice. 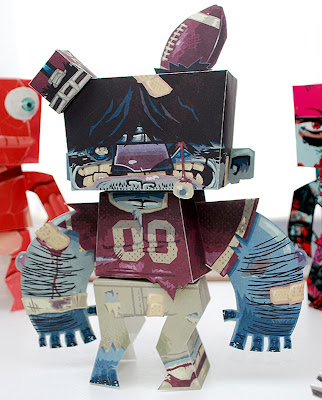 What was the best advice given to you as an artist?
Although it’s very superficial, my high school art teacher Mrs. Howe would often scold me and forced me to stop using black in my work. I didn’t realize how truly rich and deep you can make color with removing all black from the palette.
Many artists struggle to find ways to sell their art. How do you sell your work? How do you market yourself?
This is a slightly tricky one to answer since I am actually employed for my art. Still, I have to sell my work on a daily basis to my internal clients. My advice is simply, you have to understand your customer. You have to connect with them on an emotional level. Often it’s not about the art, but how the art makes them feel. Also there’s the importance of strategy. For example if I’m designing t-shirts for boys 5-10, I have to understand not only what the boys that age will think is cool conceptually, but also what their mom who’s making the purchase for them will deem “acceptable” for them to wear.

Once I understand that it comes down to knowing more surface things like what colors are “boy friendly”, won’t get dirty as quick, mix well with the other clothing items and other things like that.
This advice is of course for the sole purpose of “selling” art. If you’re just creating to create, there’s no guarantee you’ll sell anything because the art is just meant to exist, not sell. When I create for myself I don’t often think about many of those things except if I’m really trying to sell the work. Recently in the “Pokemon Battle Royale” show I selected the character Charizard. I knew he was a fan favorite, I knew I had to really have a great emotional energy with the characters pose and image, and I also wanted it to be a little edgier since the people who might want to purchase the art were mostly older and nostalgic. I guess I got it right as it sold very well. 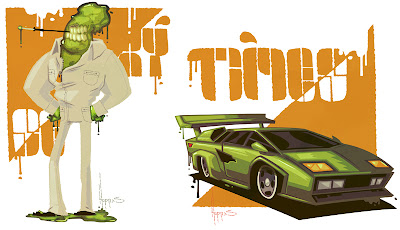 "Weekend Monster #4"
Who are some of the Minnesota artists you enjoy?
Most of them are my friends!
Lindsay Nohl: http://lindsaynohl.blogspot.com/
Chris Hajny: http://blog.hajny.com/
Francesca Buchko: http://francescabuchko.com/
Jesse Riggle: http://jesseriggle.com/projects/
Andreas Guzman: http://andres-guzman.blogspot.com/
Emory Allen: http://www.ocularinvasion.com/
Allison Black: http://5minutesketchbreak.blogspot.com/
I’m probably missing a ton! Sorry guys.
If I were to follow you around to see art in Minnesota, which places would we go? What would we see?
As cliché as it may sound, just open your eyes while we walk. Billboards, street art, some guy’s cool shoes, that girl’s t-shirt, the flier in the café, that menu, that flower, the pattern of dirt on the side of that car. I don’t really go anywhere in particular to see art. Everything has its own cool colors, patterns, compositions. Or, we could just go to Barnes and Noble or the library and look at all the cool art books! 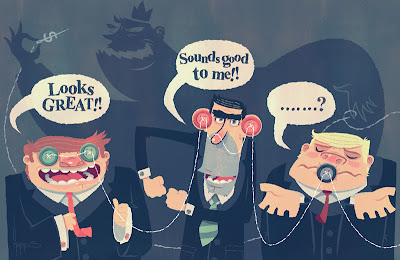 In addition to www.Local-Artist-Interviews.com, where do you go online for good art resources, whether to find a new artist, or to see what is going on in the art world locally and otherwise?
Hmm, I am an avid blog-hopper. Find a cool artist, check out all his or her friends sites, repeat. There are so, so many amazing people out there who just freely post up all their work. However when I really want to beat myself up I go to CGHub.com. It’s an incredible concept art site where people who are too good to be true post all the most amazing things. I also check a lot of art mags like High Fructose, Juxtapose, Clutter and stuff like that.
What can we expect to see from you in the future?
Cool kids t-shirts in Target! Aside from that I’m in the “Night of the Exquisite Corpse” paper toy exhibition August 17th (2012) at Light Grey Art Lab and the “Expletive Show” also at Light Grey Art Lab on September 14th. 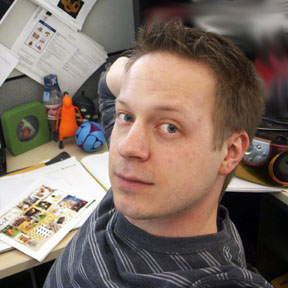 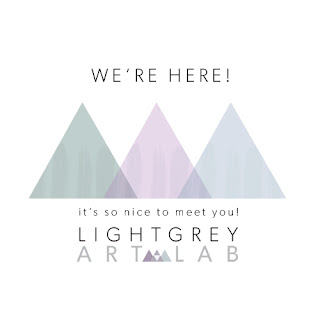